Planning for Attacks: How to Hunt for Threats in BigQuery

Home
Industry Insights
Planning for Attacks: How to Hunt for Threats in BigQuery

BigQuery (also referred as BQ) is a managed service of Google Cloud Platform (GCP), which provides data warehouse capabilities, such as storing large amounts of logs, machine learning (ML), analytics, and other types of data that can be used for BI. Querying data from BQ is done with Structured Query Language (SQL). Essentially, BQ is similar to a SQL service but on steroids. With BQ you can process a terabyte of data in a few seconds (which is insane 🤯).

BQ is commonly used in many organizations to store terabytes of sensitive data; in many cases, BQ is part of the technology stack that organizations use.

Organizations should consider their BQ a crown jewel that would almost certainly be targeted by threat actors.

BQ will probably be part of a targeted attack to perform exfiltration of large amount of data. In our hypothesis, we assume a threat actor has already compromised a user with permissions to the data.

First, we wanted to discover and learn about BQ service capabilities that stick out and might be used by a threat actor. We found these features and methods to be useful for data exfiltration:

Save Query Results is a feature where GCP provides you with the ability to save the data returned from a query into a new table just by clicking a couple of buttons. When we performed the process of saving the query output through the Web Console, we were limited into saving the results only under the same GCP project where the query was executed.

The destination project can be chosen only from a list of projects that are under the current GCP account.

We checked to see if the same restrictions apply to the BQ command line interface (CLI) tool. We discovered that the CLI tool provides a parameter that indicates the save path to a target BQ dataset, including the resource path, which also indicates the project ID 🤔. So if we can indicate the project ID, let's set this parameter to a dataset that is located in a project managed by the threat actor.

Afterwards, we will execute the command below using the compromised account of the victim:

And within a short period of time we will have all the victim’s data copied to the threat actor’s account. I’ll explain how to search for this type of exfiltration later.

GCP provides a method to transfer data into BQ from external databases, including BQ itself. Threat actors who want to transfer data from the victim’s account to a BQ dataset of their own might take advantage of this BQ feature.

The events that are generated by the Data Transfer are identified by the user agent, for example:

When we started our research on the logs that are generated by BQ service, we found that there are two main versions that have a completely different structure. If you store all the audit and data access logs, you will get both of those versions.

Except for a few BQ methods, most of the events of both versions have similar methodName fields. Also, the event structure itself will have some common pieces of information.

For example, the destination table field where query data is being saved can be located at:

Google explains about the operation.id field in their documentation. This field is used to group together a set of events triggered by the same operation.

It provides context for a set of log events and it is useful in investigation. In BQ, a good example of operation.id is when a certain job is executed on data managed by BQ. The job might take a long time to complete, so the first event will indicate the start of the job being executed and another event will indicate that the job status has changed and now it is done. Both of those events will have the same operation.id value, however, each event will include different types of information, so it's important to have them both.

This fact helped us reduce noise and provided us with all the information we needed to investigate the job.

We started investigating the behavior of the logs, focusing on operations performed by a user in BQ. The majority of the data operations in BQ are identified as a Job, including inserting data, creating stored functions, querying data, and more. We focused on logs with the google.cloud.bigquery.v2.JobService.InsertJob method type and we scoped it to fields that can indicate data exfiltration:

With time, we got more familiar with the logs of BQ and we found this list of interesting fields with the help of Google’s official documentation: 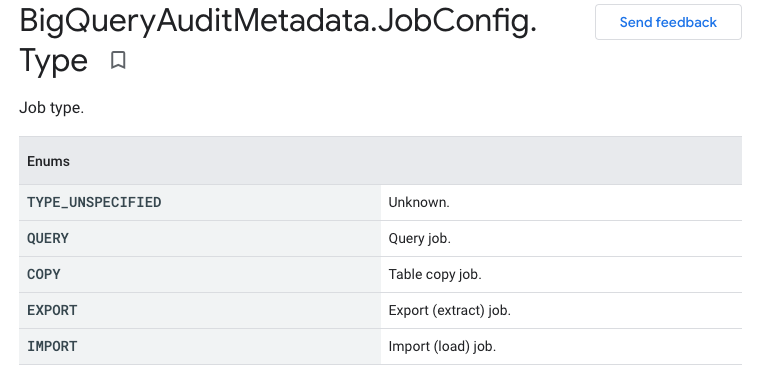 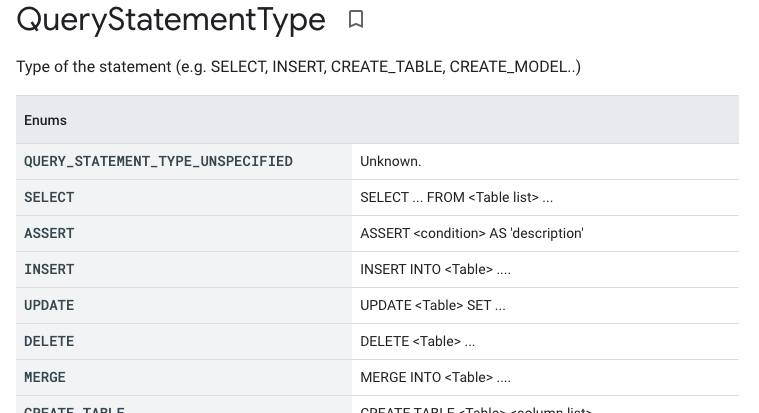 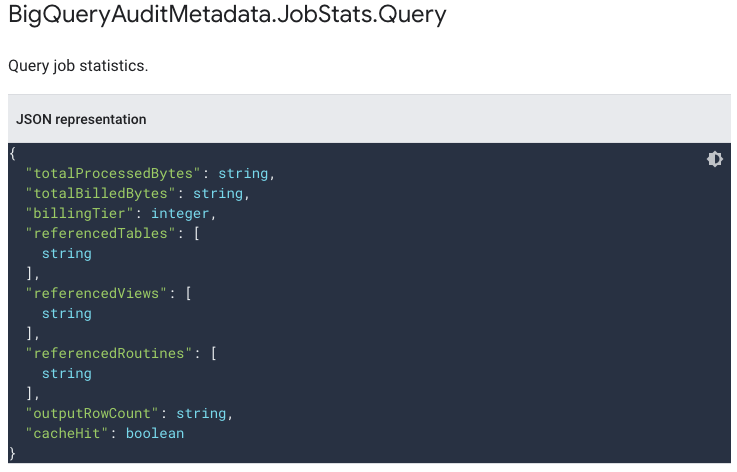 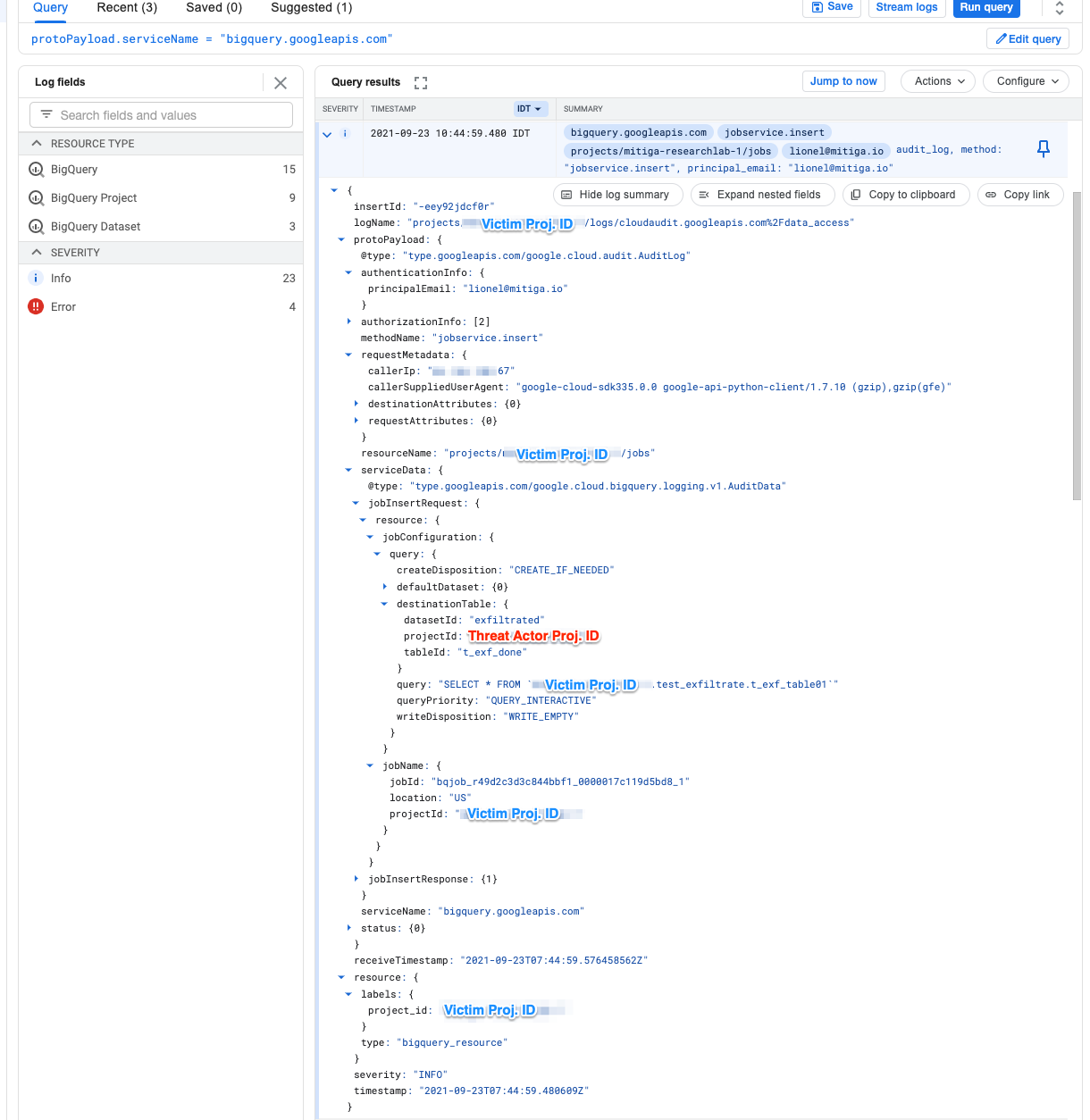 During our research work, we noticed that the field protoPayload.metadata.jobChange.job.jobConfig.queryConfig.destinationTable contains a destination table that contains random identities of the dataset and table under the current project ID. It looked like this behavior is something that GCP manages.

We wanted to have a good explanation about why this is happening to better understand how the BQ service works.

What are these strange tables?

If you had a chance to use BQ to query data using GCP’s Web Console, you might have noticed that when you query again using the same SQL statement for the second time, the data will return faster. In addition to that, you will have an indication of 0.0 bytes of processed data. What happens is that BQ caches the results in a temporary table. Our conclusion about the strange destination table names is that GCP automatically optimizes the user experience and caches the queried data in a temporary location. 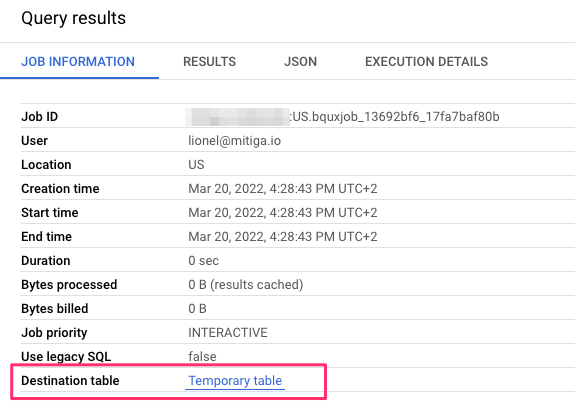 Because BigQuery stores so much sensitive data, it’s an extremely appealing target for threat actors, and our research showed ways to exfiltrate data. This information helps us better research critical incidents in environments that leverage BQ, so we can accelerate the IR process and help customers get back to business as usual quickly. Herding Cats: How to Lead a Digital Transformation in a Federated Organization