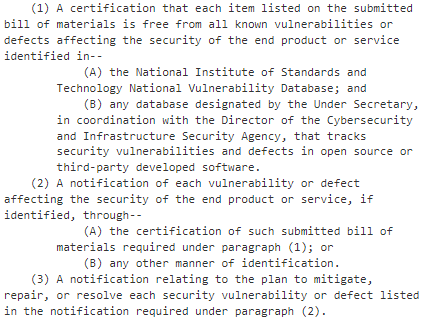 At first glance, the intent seems reasonable. Vendors need to include an SBOM for their software and services, and any known vulnerabilities (according to the National Vulnerability Database and possibly other databases in the future) need to be addressed or have some sort of plan to deal with it by repairing, mitigating, or resolving it.

Unfortunately, there are several major problems with this piece of legislation, ranging from poorly or undefined terms to some truly perverse incentives being created for vendors.

The first issue is that the same rules and processes are being applied to both “end product or service” equally. An end product typically has a finite amount of software included (basically whatever it is they ship to you for installation). A service may have a nearly infinite chain behind it, e.g. many PaaS vendors (Heroku, OpenShift) run on top of Amazon AWS and rely on the services it provides (EC2, ELB, RDS, S3, etc.). The language here is unclear. I assume they want an SBOM of just the service and not underlying services it relies upon, but this isn’t clear.

A second major problem is that (currently) the NVD only regurgitates the current CVE, and CVE has a very limited focus historically. Even with growth the program still is handling less than 20,000 vulnerabilities per year. The Python PyPi library has 350,000 packages. NPM has 2 million. The world of software is well into the millions of OpenSource libraries and programs, to say nothing of the commercial worlds. Or the services world. To say only a fraction of known public vulnerabilities are included in CVE and thus the National Vulnerability Database would be a gross understatement. CVE also does not cover backdoors or other “intentional” flaws, and cloud services are only given limited coverage at this time.

One piece of good news: there’s no mention of specific SBOM standards. Any technical standard specified may be obsolete in a few years, so this is good, and there is already some good work on current best practices from the National Telecommunications and Information Administration.

The good news: If you have a mature security and development program, you are most likely already compliant or can achieve compliance without too much additional work.

While it isn’t a given that this legislation will pass and be enacted, it is clear that the US Government (and indeed, many companies) are rapidly approaching a time where they will demand SBOMs, statements on vulnerabilities, and timelines around remediation in order to buy services and products.

The Cloud Security Alliance has a number of projects and papers that deal with these areas, such as the DevSecOps Working Group and the Global Security Database, which is aimed at providing better vulnerability information. Learning Not to Step on Lego: Blast Radius, Cloud Sprawl, and CNAPP